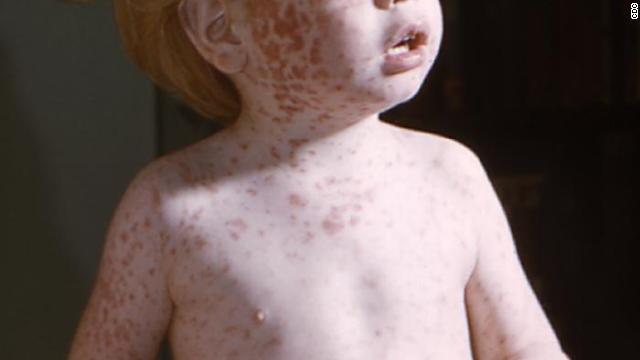 Those who choose not to vaccinate put other people’s babies at risk, experts say.
STORY HIGHLIGHTS

(CNN) — This year is on track to be the worst for measles in more than a decade, according to new numbers released Thursday by the U.S. Centers for Disease Control and Prevention. And people who refuse to vaccinate their children are behind the increasing number of outbreaks, health officials say.

There were 159 cases of measles in the United States from January 1 through August 24, according to the CDC. If that trend continues, there will be more cases in 2013 than in any year since 1996, when some 500 cases were reported. The number would also surpass that of 2011, when there were 222 cases.

Measles cases in the United States numbered in the hundreds of thousands before the advent of vaccination, and dropped dramatically throughout the 1960s. The disease was thought to have been eradicated in 2000, but the numbers have recently crept back up, largely because of visitors from countries where measles is common and because of vaccine objectors within the United States. Nearly two-thirds of the reported cases happened in three outbreaks in communities where many people don’t vaccinate their children for religious or philosophical reasons.

Measles is a highly contagious respiratory disease caused by a virus. But it can be prevented by the MMR vaccine. The CDC recommends that kids get two doses — the first at 12 months of age and the second dose before entering school.

“This is very bad. This is horrible,” said Dr. Buddy Creech, a pediatric infectious disease expert at Vanderbilt University who was on a telephone briefing with the CDC Thursday morning. “The complications of measles are not to be toyed with, and they’re not altogether rare.”

According to the CDC, one to three out of every 1,000 children in the United States who get measles will die from the disease, even with the best of care. Even if complications such as pneumonia and encephalitis aren’t deadly, they can make children very sick; in 2011, nearly 40% of children under the age of 5 who got measles had to be treated in the hospital.

Measles usually starts with a fever, which can get very high, followed by a cough, runny nose and red eyes. Soon a rash of tiny, red spots will start at the head and spread to the rest of the body. The rash can last a week and coughing can last for up to 10 days.

Creech said he’s concerned younger physicians might not be quick to recognize the signs of measles, since there have been only pockets of the disease since 2000.

Among those who have been stricken with measles this year, 92% were not vaccinated or had unknown vaccination status. The largest outbreak was in New York, where 58 people contracted measles in a community where many refuse to be vaccinated for religious reasons.

Those who choose not to vaccinate put other people’s babies at risk, since babies cannot be vaccinated until their first birthday, and are therefore vulnerable to the disease.

“I hope that those who are vaccine hesitant or vaccine avoidant realize there are consequences to their actions,” Creech said. “None of us lives in isolation.”